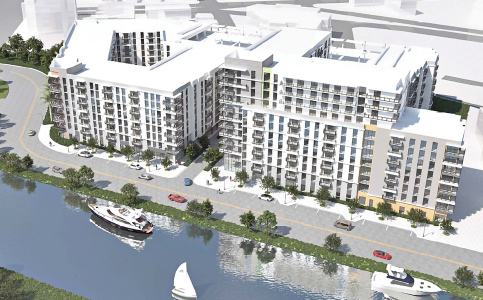 The lot area of 172,471 square feet or 3.959 acres is the former Paradise Trailer Park. A portion of the Phase I property abuts the historic North Fork of the Miami River.

Iris Escarra, an attorney representing the owner-developer, said the property has its principal frontage on Northwest South River Drive, which wraps around the property. However, the portion abutting the eastern frontage is inaccessible due to the elevation grade change as it is an ingress/egress ramp from Northwest 27th Avenue. The 27th Avenue bridge crosses the river east of the site.

“In addition to adding housing options in the area, the redevelopment of the Property will also remove the former trailer park which … formerly produced multiple Code Compliance and Unsafe Structure complaints to the City,” wrote Ms. Escarra.

Ms. Escarra wrote, “The Project is proposed as an Urban Core Multifamily project providing a mix of units and activating the Ground level with indoor and outdoor amenity spaces as well as garden style units. The Project is in close proximity to NW 27th Avenue as well as NW 20th Street, a designated Transit Corridor.”

She said this project will activate the pedestrian realm by providing habitable space along the street fronts and providing additional residential options in the neighborhood.

“The Project proposes the redevelopment of a former trailer park which limited the pedestrian access to the area due to the lack of sidewalks and crime issues.

“The nearby Transit Corridor provides abundant mass transit options within close walking distance to the Project. The Project provides bike parking, in excess of the required spaces, to encourage cycling,” she wrote.

The developer is requesting waivers to permit:

■Up to a 10% increase in the maximum residential floor plate area.

Carlos A. Jimenez, of architectural firm Anillo. Toledo. Lopez LLC, presented renderings of the buildings and a site plan to the board.

He said the buildings will connect at the garage, and a cross block passage will provide pedestrian connectivity.

Board member Ligia Ines Labrada said, “I can’t say I’m overly excited about that south elevation. It just seems really long … and it could have been more articulated. I do appreciate the cut-through and passage. The scale of the project is good, and the way it’s broken into two phases.”

Board member Anthony Tzamtzis said, “I think the applicant has found a way to organize the project on a site that is relatively not so easy. It has a lot of features … I like the way that the project is organized, in terms of layout, but there are also issues because of that.” He complained of a “tremendously long corridor.”

Board member Fidel Perez said he liked the project but had a few suggestions to improve it, including widening the crosswalk passage its entire length to make it more inviting.

“The cross access needs to be the whole width, not just a little section. You can open the whole thing, and use pavers,” he said.

Mr. Perez also suggested a redesign of the residential units on the east, to make them face outward to the sidewalk with doors and entryways.
“That whole strip on the east side, have the door front toward the sidewalk,” he said.

Mr. Perez continued, “One thing I don’t think works is the pool in the courtyard. Pools in a rental building in courtyards don’t work. You have a great opportunity to put this pool on the roof of the parking garage … create a lot of amenities there. At least have it away from everybody.”

Board member Robert Behar said he also is concerned about the swimming pools planned for inside the courtyards and suggested relocating the pools.
He said, “It’s a good project. It’s a needed project. I’m in favor, but there are opportunities to do a little bit more.”

Board member Dean Lewis said moving the pools to the roof deck of the garage is the better solution.

Chairman Ignacio Permuy said, “I appreciate the massing, the way it’s broken up in the center, and also the courtyard, they do have openings that are significant, let light come in … I personally appreciate what’s been done. I like the articulation.” But he added he agrees with other board members’ suggestions about moving the pools and other ideas.

Mr. Perez moved to recommend approval of the project with several conditions: remove the pools from the courtyards and relocate; widen the cross access passage to have a better access to the back of the property – “dress it up if you want”; make the units on the east face toward the sidewalk.
Mr. Behar recommended the developer study pushing the garage back in order to improve the southern elevation.

The vote was unanimous.