Investors could be facing the polar opposite of the Goldilocks scenario of just-right conditions, according to Leuthold Group CIO Doug Ramsey.

“No too hot and not too cold? What about both?” Ramsey wrote in a note (emphasis his).

“Job growth and inflation are hot enough to for the Fed to follow through with its on its hawkish promises,” he said. “But the leading indicators continue to warn us of oncoming cold. The odds are that the porridge settles at the right temperature, without an intervening recession, look longer by the day.”

While the best long-term entry points to the stock market were to be had in terrible economies, that happened when the problems were priced in, Ramsey said.

“Money is tight and the tape has rolled over, yet valuations trade near their pre-COVID highs.”

“At some stage in the bear market, we’ll go to where ‘bad news is good news,'” he added. “But in terms of price that is probably at least a few hundred S&P points below current levels.”

“The question of time is more difficult because of the unpredictable lags associated with the Leading Economic Indicators.”

BofA says the good news for bulls is that stocks are still holding up over bonds. 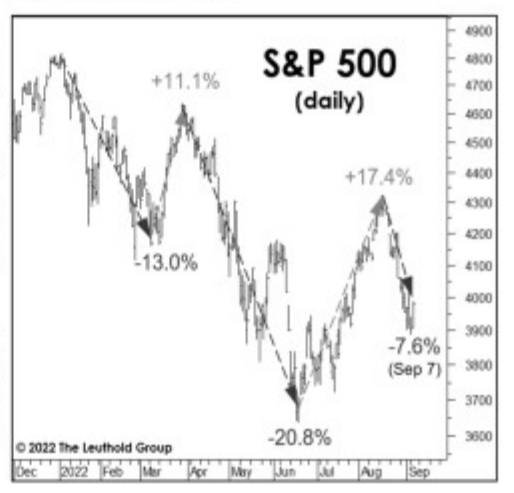