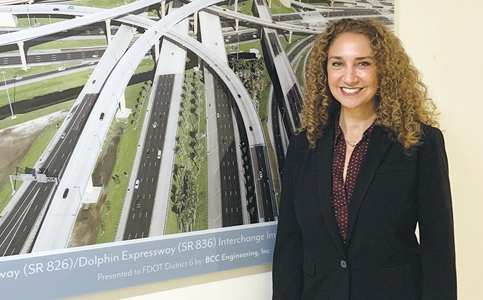 The Florida Department of Transportation (FDOT) recently changed leadership of District Six, which includes Miami-Dade and Monroe counties. Stacy Miller was appointed secretary in March and started in the job in May. She took the reins of the area after former secretary James Wolfe retired after 43 years in the department.

Ms. Miller also has an extensive career in transportation. She has spent 30 years at the department. She started her career in January 1991, just three weeks after graduating from the University of Florida with a bachelor of science in civil engineering.

Ms. Miller first got the position of professional engineering trainee in District Four (Broward, Palm Beach, Martin, St. Lucie and Indian River counties). As years passed, she was a highway designer; then at the office of Consultant Project Management she oversaw the consultants who were doing highway designs, and later became supervisor. In 2000 she became the first program management engineer for the State of Florida.

Secretary Miller then achieved her biggest professional accomplishment when she created an office, the Program Management Office, focused on the department’s finances and how they built each district’s work program. The goal was to understand the scope, scheduling and the funding of a project.

What started as an office of five people then became a team of 35, and later the pilot office was replicated statewide.

“Ultimately, it was replicated in all other districts and our central office in Tallahassee.” she said. “I had the chance to create what I thought was going to be the best combination of functions and staffing. The fact that it was ultimately replicated throughout the state I think was a true testament to what I was able to accomplish with my team in District Four.”

After creating the office, Ms. Miller held the positions of Director of Transportation Development in District Four. Then she was transferred to the Tallahassee central office to become the Assistant Secretary for Finance and Administration for the Department of Transportation, where she was two years before coming back to South Florida and becoming the head of Miami-Dade and Monroe counties.

For District Six, she has atop her desk major projects that would follow the now-operating Port of Miami Tunnel, which connects SR A1A/MacArthur Causeway to Dodge Island, providing direct access between the seaport and highways I-395 and I-95, creating a second entry to Port Miami in addition to the Port Bridge.

Also, the I-395-Miami PD&E Study, which generated the “realignment, capacity and geometric improvements to Interstate 395 (I-395), an elevated expressway that traverses approximately 1.2 miles within the City of Miami,” according to the FDOT website. This last project is to provide the capacity necessary to support the Port of Miami Tunnel.

District Six, now under the leadership of Secretary Miller, is home to nearly 3 million people and its roads are traveled more than 30.8 million miles daily. She is now head of perhaps one of the busiest counties in the state and, in her own words, “it’s been exciting since joining District Six.”

She was interviewed by Miami Today reporter Gabriela Henriquez Stoikow.

To read the full article and the rest of the Miami Today issue, subscribe to e-MIAMI TODAY, an exact replica of the printed edition.

Porsche to debut amid market tumult in historic IPO

Porsche to debut amid market tumult in historic IPO