Monkeypox: What to know amid unusual rise in cases

MANILA, Philippines—Over the past week, monkeypox— a type of viral infection common in West and Central Africa—has made headlines as rising cases have been recorded in at least 12 countries.

Monkeypox, according to the World Health Organization (WHO), is a rare disease caused by the monkeypox virus, a member of the Orthopoxvirus genus in the family Poxviridae.

Also included in the Orthopoxvirus genus is the variola virus, which causes smallpox.

Experts have found that symptoms of monkeypox were similar to that of smallpox. Monkeypox, however, is less contagious and can cause less severe illness than smallpox.

Monkeypox is also not a new virus. 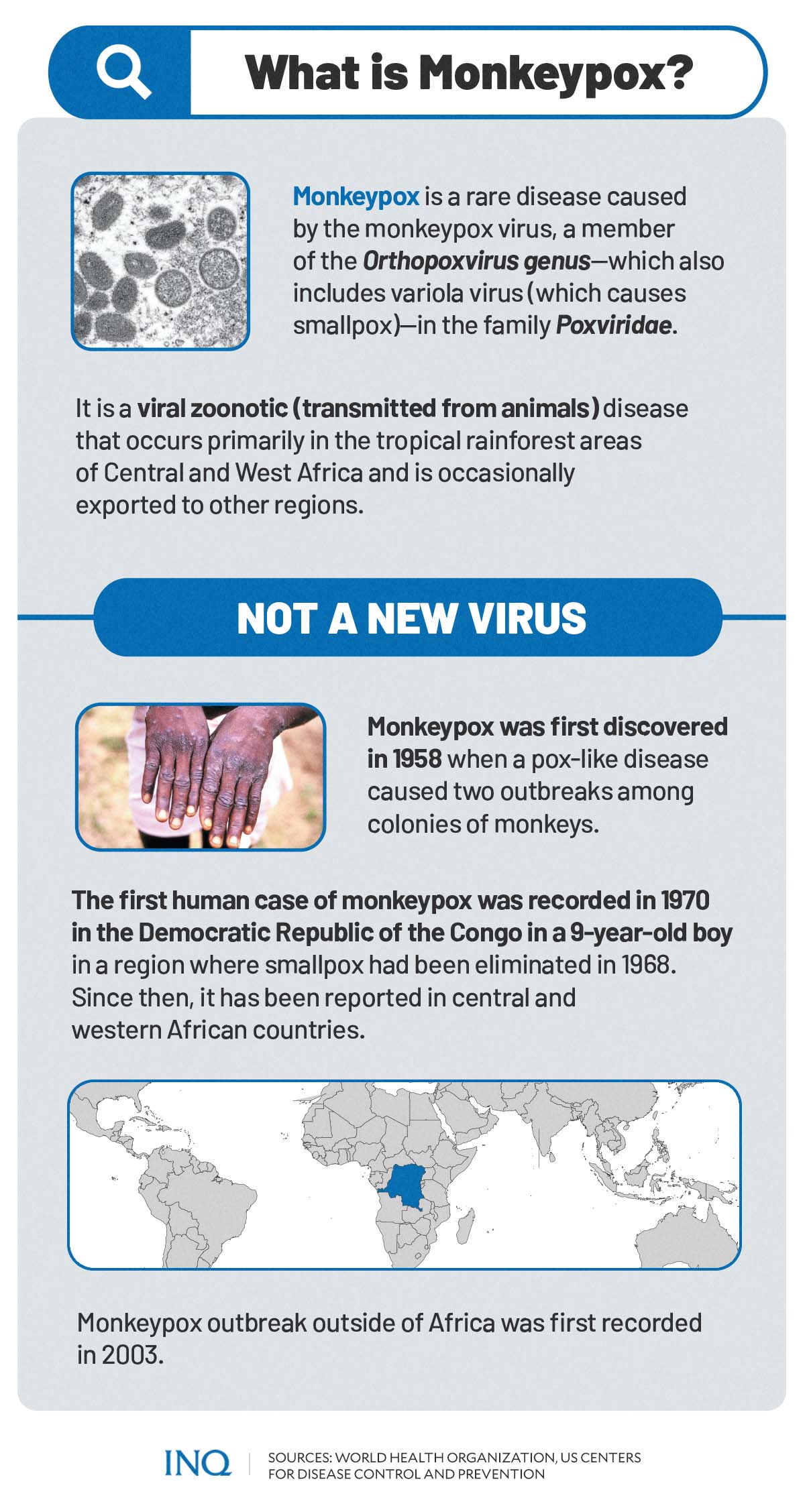 It was first discovered in 1958 when two outbreaks of a pox-like disease were observed in colonies of monkeys kept for research, “hence the name ‘monkeypox’,” the United States Centers for Disease Control and Prevention (US CDC) noted.

The first recorded human case of monkeypox was in 1970 in the Democratic Republic of the Congo (DRC) in a nine-year-old boy in a region where smallpox had been eliminated in 1968.

Although the virus occurs primarily in tropical rainforest areas of Central and West Africa,  the WHO considers it a disease of global public health importance as outbreaks outside of Africa have been previously recorded.

“In 2003, the first monkeypox outbreak outside of Africa was in the United States of America and was linked to contact with infected pet prairie dogs,” WHO stated.

WHO, as of May 21, has so far received 92 laboratory-confirmed cases and 28 suspected cases of monkeypox from 12 countries that are not endemic to the monkeypox virus.

These reported cases of monkeypox were located in the following countries outside the central and west Africa, including countries in Europe and North America:

Between December 15, 2021 and May 1, 2022, cases of monkeypox were recorded in some of these endemic countries, specifically: 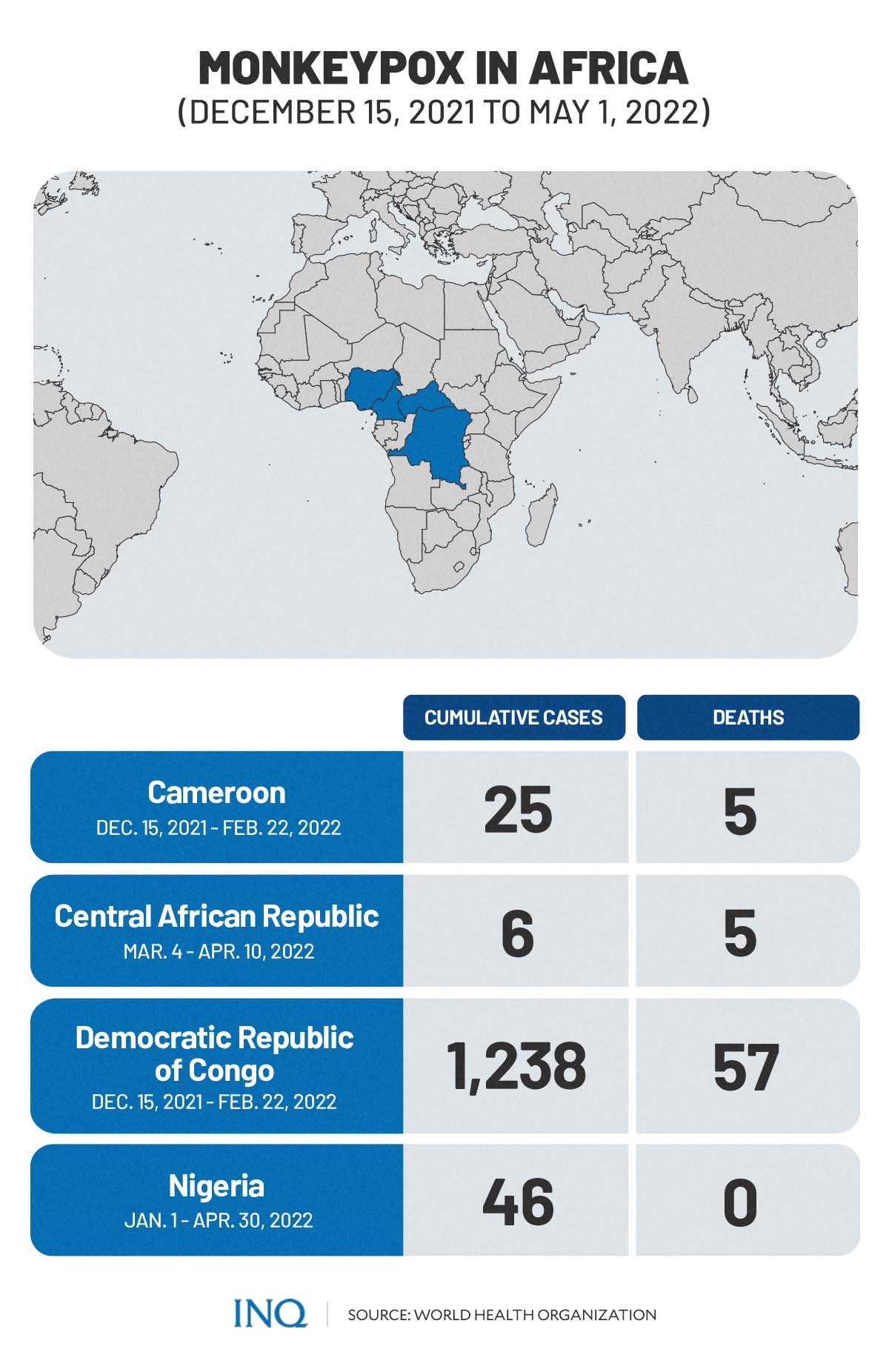 On May 20, the Department of Health (DOH) assured the public that no case of monkeypox has been detected yet within the Philippines or in its territorial borders.

“Reported cases thus far have no established travel links to an endemic area,” WHO said in a statement released May 21.

“To date, all cases whose samples were confirmed by PCR have been identified as being infected with the West African clade.”

“Genome sequence from a swab sample from a confirmed case in Portugal, indicated a close match of the monkeypox virus causing the current outbreak, to exported cases from Nigeria to the United Kingdom, Israel, and Singapore in 2018 and 2019,” WHO noted.

The increasing confirmed and suspected cases of monkeypox with no direct travel links to an endemic area is, however, described by the WHO as a “highly unusual event.” It also warned that more cases of monkeypox are expected to emerge across the globe.

The same sentiments were echoed by the UK Health Security Agency (UKHSA).

“This [outbreak] is rare and unusual,” said epidemiologist Susan Hopkins, the chief medical adviser of the UKHSA, in a statement.

“Exactly where and how they [the people] acquired their infections remains under urgent investigation,” said the agency.

According to the UK’s National Health Service (NHS), monkeypox can be caught from infected wild animals located in parts of West and Central Africa. The virus is also thought to be spread by rodents, such as rats, mites, and squirrels.

Humans can get infected by the virus through bite or contact with the blood, bodily fluids, spots, blisters, or scabs of an infected animal. It is also possible to catch the virus by touching the skin or fur of infected animals, according to experts.

Monkeypox can also be caught by eating meat from an infected animal that has not been cooked thoroughly.

“Monkeypox virus is transmitted from one person to another by close contact with lesions, body fluids, respiratory droplets, and contaminated materials such as bedding,” WHO said in a recent statement.

This means that monkeypox can spread through:

WHO also noted that currently available information based on the recent outbreak of monkeypox showed that “cases have mainly but not exclusively been identified amongst men who have sex with men (MSM) seeking care in primary care and sexual health clinics.”

“What seems to be happening now is that it has got into the population as a sexual form, as a genital form, and is being spread as are sexually transmitted infections, which has amplified its transmission around the world,” said David Heymann, chair of WHO’s Strategic and Technical Advisory Group on Infectious Hazards with Pandemic and Epidemic Potential.

READ: WHO working on more monkeypox guidance as cases rise

However, WHO and the United Nations (UN) clarified that the risk of getting infected with monkeypox is “not limited to men who have sex with men.”

The US CDC likewise emphasized that the monkeypox virus can be spread by anyone regardless of sexual orientation, through contact with body fluids, sores, or shared items that are contaminated.

“CDC is urging health care providers in the US to be alert for patients who have rash illnesses consistent with monkeypox, regardless of whether they have travel or specific risk factors for monkeypox and regardless of gender or sexual orientation,” said the US CDC.

Human-to-human transmission, said WHO, is occurring among people in close physical contact with cases who are symptomatic. The extent to which asymptomatic infection may occur is unknown.

Monkeypox, according to the US CDC is characterized by a chickenpox-like rash or sores over an infected patient’s skin. 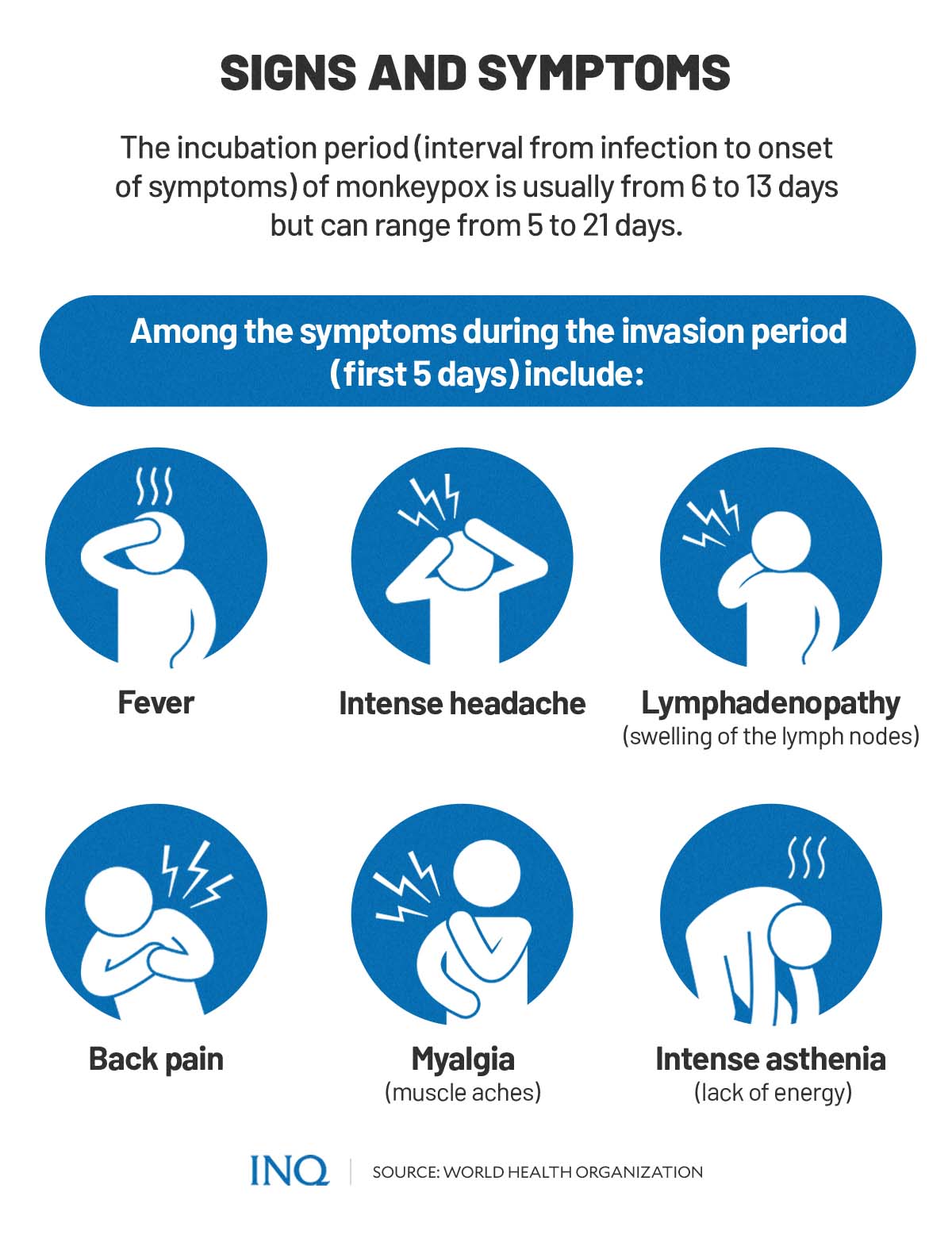 These symptoms usually last between 0-5 days, also identified as the invasion period.

Meanwhile, skin eruption or the appearance of a rash can be observed within 1-3 days (sometimes longer) after the occurrence of fever.

WHO said rash tends to be more concentrated on the face and other extremities than on the trunk. 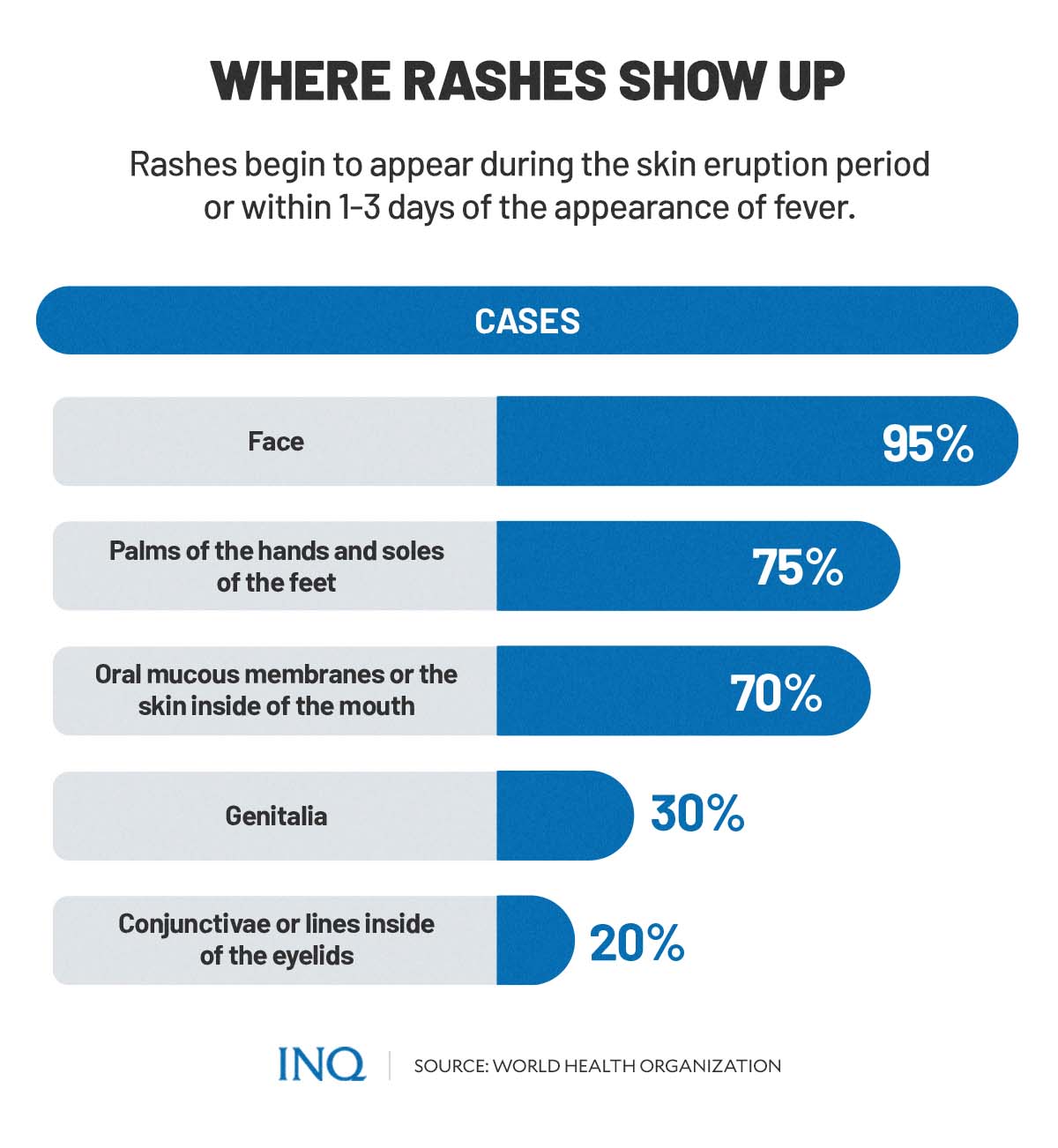 “The number of lesions varies from a few to several thousand. In severe cases, lesions can coalesce until large sections of skin slough off,” it added.

The incubation period—the interval from infection to onset of symptoms—of monkeypox is usually from 6-13 days, according to WHO and US CDC. However, it can range from 5-21 days.

“Severe cases occur more commonly among children and are related to the extent of virus exposure, patient health status, and nature of complications,” WHO said, adding that “underlying immune deficiencies may lead to worse outcomes.”

In some cases, monkeypox can cause complications, including secondary infections, bronchopneumonia, sepsis, encephalitis, and infection of the cornea with ensuing loss of vision.

According to the US CDC, there is no proven, safe treatment yet for monkeypox virus infection. 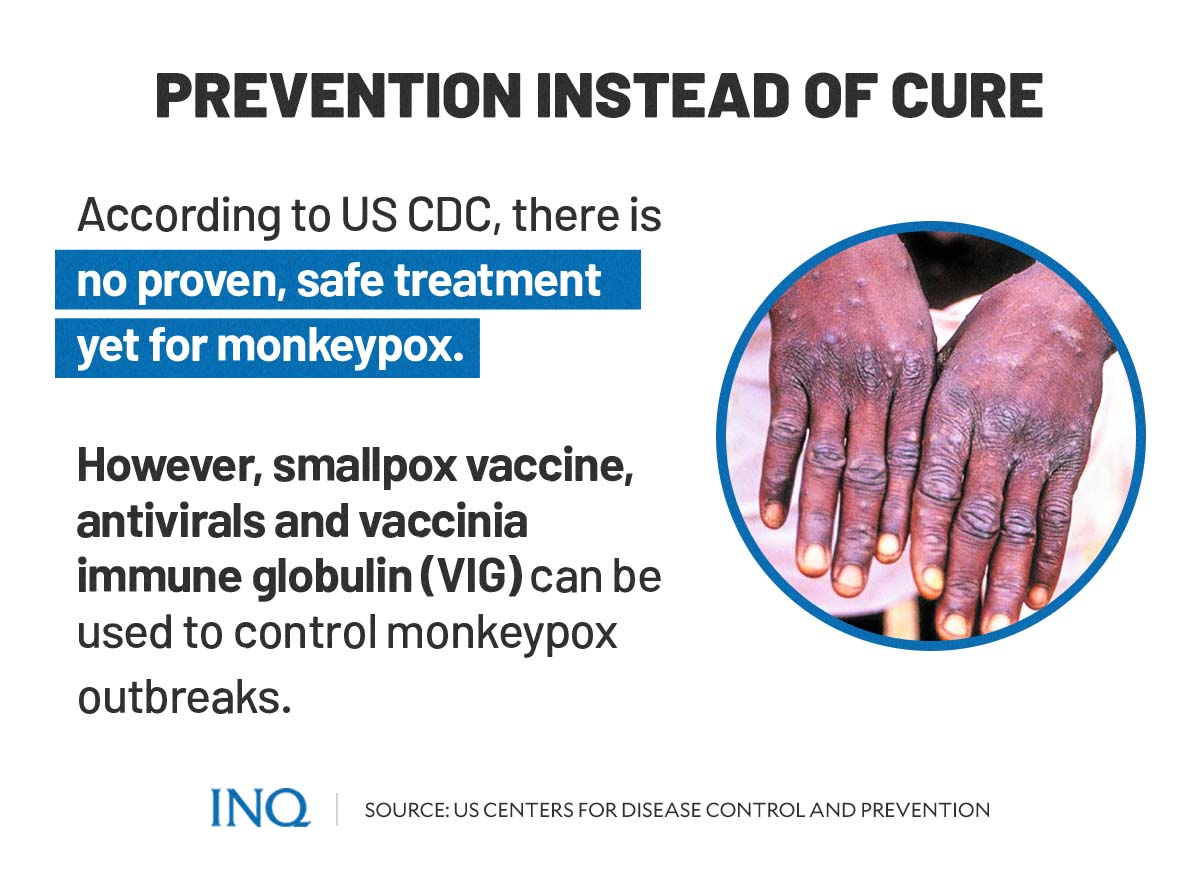 However, the smallpox vaccine, antivirals, and vaccinia immune globulin (VIG) can be used to control the monkeypox outbreak.

“At the present time, the original (first-generation) smallpox vaccines are no longer available to the general public. Some laboratory personnel or health workers may have received a more recent smallpox vaccine to protect them in the event of exposure to orthopoxviruses in the workplace,” said WHO.

“A still newer vaccine based on a modified attenuated vaccinia virus (Ankara strain) was approved for the prevention of monkeypox in 2019. This is a two-dose vaccine for which availability remains limited,” it added.

The European CDC, meanwhile, recommends smallpox vaccination only in people who have been or are likely exposed to monkeypox—especially the immunocompromised people who are considered at high risk.

There are several preventive measures that can be taken to against infection of monkeypox virus, such as:

“There are vaccines available, but the most important message is, you can protect yourself,” said Heymann.

Should it be a cause of concern?

“The risk of the general population remains extremely low at the moment, and I think people need to be alert to it,” said Hopkins.

She added that symptoms for most adults would be “relatively mild.”

The outbreak, however, caused concerns for some as cases emerged amid the still increasing cases of SARS-CoV-2, the virus that causes COVID-19, across the globe.

An article published in Nature—a peer-reviewed science journal—quoting Jay Hooper, a virologist at the US Army Medical Research Institute of Infectious Diseases in Fort Detrick, Maryland, said that the monkeypox is unlike SARS-CoV-2.

“It doesn’t transmit from person to person as readily, and because it is related to the smallpox virus, there are already treatments and vaccines on hand for curbing its spread. So while scientists are concerned, because any new viral behavior is worrying — they are not panicked,” the article stated. 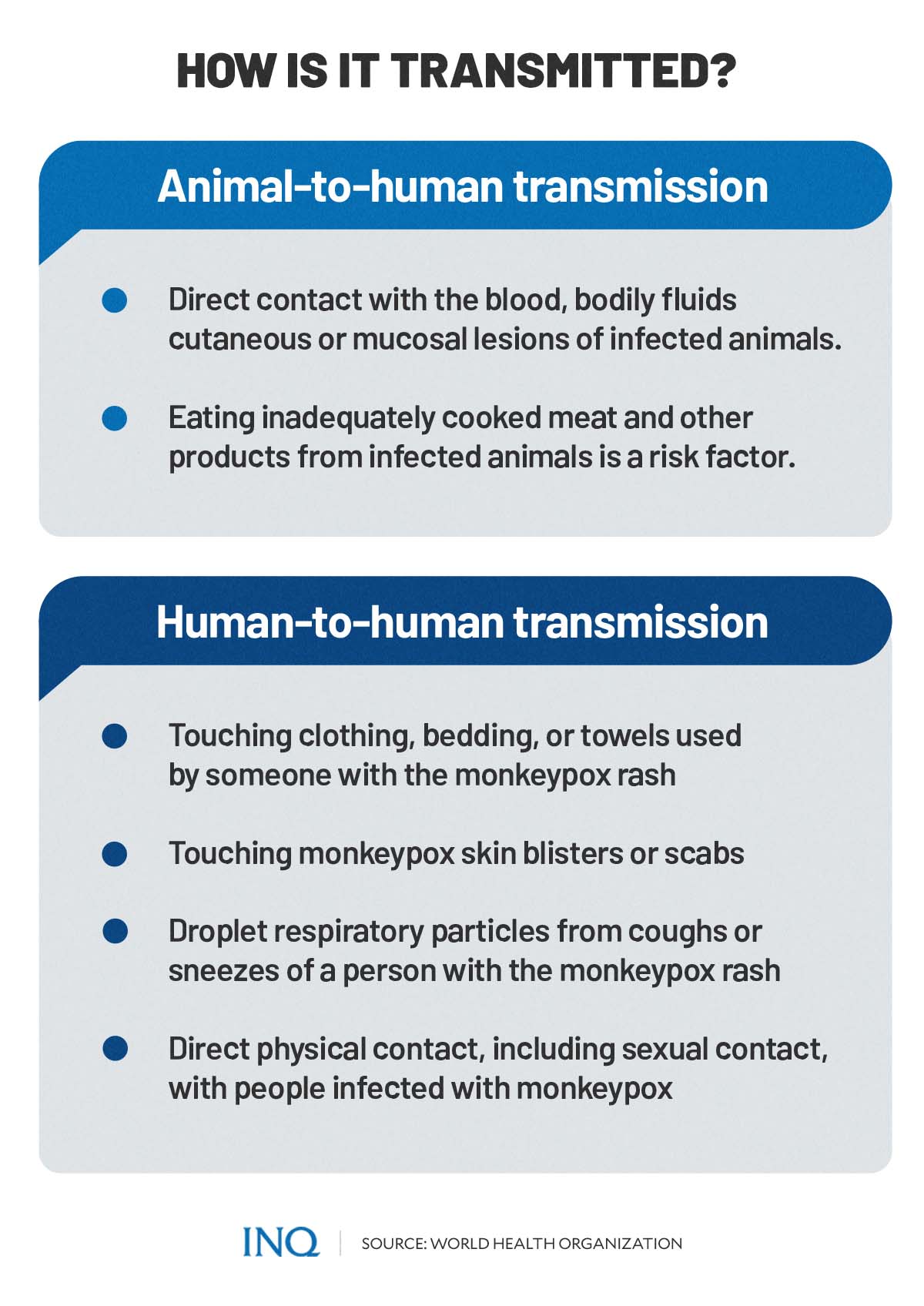 What experts have found “deeply concerning” about the outbreak, according to the Nature article, was that the monkeypox virus can spread asymptomatically, making it troubling since it would be harder to track.

Another concern among experts is that many case clusters of monkeypox recently reported were individuals who are part of the GBMSM (gay, bisexual, and other men who have sex with men) community—considering also the fact that monkeypox is not known to be sexually transmitted, although sexual activity constitutes close contact—a possible mode of transmission of monkeypox virus.

Don’t miss out on the latest news and information.

us stocks: Wall Street Week Ahead: Bruised US stock investors brace for more pain in second half of 2022

us stocks: Wall Street Week Ahead: Bruised US stock investors brace for more pain in second half of 2022

Best and Worst Spots in the U.S. Housing Market, According to Lennar