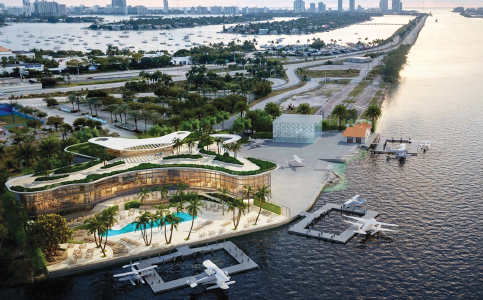 Miami-Dade County and the City of Miami have plans to plant mangroves on Watson Island, as part of an overall county seaport mitigation project.

At a meeting today (6/23), city commissioners are to consider a resolution that would allow a private company to plant mangroves and install rip-rap as part of the mitigation project, and approve a covenant with the county.

The city owns the man-made island that connects mainland Miami with Miami Beach via the MacArthur Causeway.

The proposed legislation notes this work is related to the county redeveloping Cruise Berth H, adjacent to PortMiami.

Today’s resolution, if approved, would authorize City Manager Art Noriega to execute a license, access and indemnification agreement between the city and Kearns Construction “to plant, place, install, inspect and monitor mangroves, rip-rap as part of the mitigation project, at the City-owned property located at 1099 MacArthur Causeway … also known as Watson Island Boat Ramp.”

Mr. Noriega would also execute a restrictive covenant, running with the land in favor of Miami-Dade County, to ensure that the project is not disturbed or removed for the life of the covenant.

The resolution says Miami-Dade County is redeveloping Cruise Berth H, and pursuant to the applicable environmental resource permit, “will mitigate unavoidable impacts by installing mangroves, rip-rap, and related materials” at the city’s property near the boat ramp.

In May 2021, commissioners authorized the county mayor to execute a license, access, and indemnification agreement with the city and other agreements in relation to the seaport mitigation project.

The city has agreed to permit the county or its agent, Kearns Construction, to plant the trees and install the rip-rap and associated other materials at the property, and to remove certain exotic vegetation from the property, as required as part of an overall county seaport mitigation project.

“The City shall be responsible for maintaining the Seaport Mitigation Project free of solid waste, exotic pest plant species, and nuisance species after completion of construction for the life of the Covenant,” it reads.

Related documents describe the work to be done.

The project area is divided into two sections, north and south of three piers with their accompanying boat ramps.

The overall area ranges from uplands to near shore habitat. The substrate in the area is composed of rocks of varying size.

There is also a large amount of debris and many dinghies, abandoned or used by the boaters in the offshore mooring area along the shoreline of the project area.

The dominant plant species within the project area fluctuates between Red Mangrove and Brazilian Pepper. There are also barren areas within the upland and intertidal zone. The nearshore zone contains seagrass beds.

The first phase of the restoration and enhancement project will be to remove debris and nuisance/exotic vegetation from the proposed mitigation area.

Nuisance/exotic vegetation to be removed will be primarily composed of Brazilian Pepper. Subsequently, substrate will be removed at proposed planting areas in order to obtain appropriate elevations for planting mangroves.

“This initial phase will create space and favorable elevations for the planting and recruitment of mangroves. Then a 2:1 hybrid slope will be created landward of the mangrove planting area, from the existing top of embankment to the above mentioned mangrove elevations. The hybrid slope will be composed of a rip-rap revetment capped with soil and coastal upland plantings,” reads the project description.

A rip-rap waterbreak will be placed below the mean high water line and along the waterward edge of the mangrove planting areas at a minimum of 10 feet from the seagrasses.

To plant the mangrove saplings, holes will be created in the existing substrate once target elevation is obtained.

Mangroves will be planted 3 feet from center to each other. The proposed restoration area where plantings will occur is 0.073 acres.

Watson Island is home to several users that have leases with the city, including Jungle Island, Island Gardens and the Miami Children’s Museum.

The island is also home to Ichimura Miami – Japanese Garden, the Miami Outboard Club, and the Miami Yacht Club.

In March, city commissioners approved a utilities deal with the county that is necessary for construction of a seaplane base on the island.

The city leases property to Nautilus Enterprises LLC, which with Chalk’s Airline Inc. have planned a new seaplane terminal and related businesses on the site.

Johnny Depp not in talks to return to ‘Pirates’ franchise, rep clarifies

Johnny Depp not in talks to return to ‘Pirates’ franchise, rep clarifies