The Dow Jones Industrial Average declined during its recent trading at the intraday levels, to record losses for the second day in a row, by -1.23%. It lost about -402.230 points and settled at the end of trading at the level of 32,396.171, after it fell slightly during Monday’s trading by a rate of -0.14%.

Stocks opened lower as geopolitical tensions heightened due to US House Speaker Nancy Pelosi’s visit to Taiwan, defying Chinese authorities who have warned of dire consequences if the trip occurs.

CNN reported that US House Speaker Nancy Pelosi’s visit to Taipei is the first time a US House speaker has visited Taiwan in 25 years. The news report said her trip comes at a low point in US-China relations and despite the Biden administration’s warnings of pause, China considers Taiwan part of its territory and has warned against responding to the visit.

San Francisco Fed President Mary Daly reportedly said on Tuesday that inflation figures are “too high” and that the Fed’s work to ease price pressures in the US economy is “not yet complete.” Speaking on the same day, Chicago Fed President Charles said Evans said a 50 basis point increase in the target rate at the September meeting was reasonable and had not hesitated to support another 75 basis point increase.

Cleveland Federal Reserve President Loretta Meester said Tuesday in a live interview with The Washington Post Live that the decline in second-quarter gross domestic product reported last week, the second consecutive quarterly decline, does not mean the US economy is in a recession. Meester said the recent moderation in consumer demand is what the Fed wants to see, and that bringing demand back in line with supply is key to slowing inflation.

US job opportunities fell to 10.7 million in June from 11.3 million in the previous month, according to the Bureau of Labor Statistics. The estimate in a survey compiled by Bloomberg was about 11 million. Employment fell to 6.4 million from 6.5 million bringing the employment rate down to 4.2% from 4.3%. At the same time, the number of people leaving their jobs decreased but remained above the level a year ago as workers were confident of finding another job.

Technically, the index faced some pressure as a result of the relative strength indicators reaching overbought areas. The beginning of the emergence of a negative crossover in them, especially amid its trading along a corrective bearish slope line in the short term. This comes despite the continuation of the positive support for its trading above its simple moving average for the previous 50 days.

Therefore, our expectations indicate more decline for the index during its upcoming trading, as long as the resistance 33,240 remains intact, to target the support level 31,885. 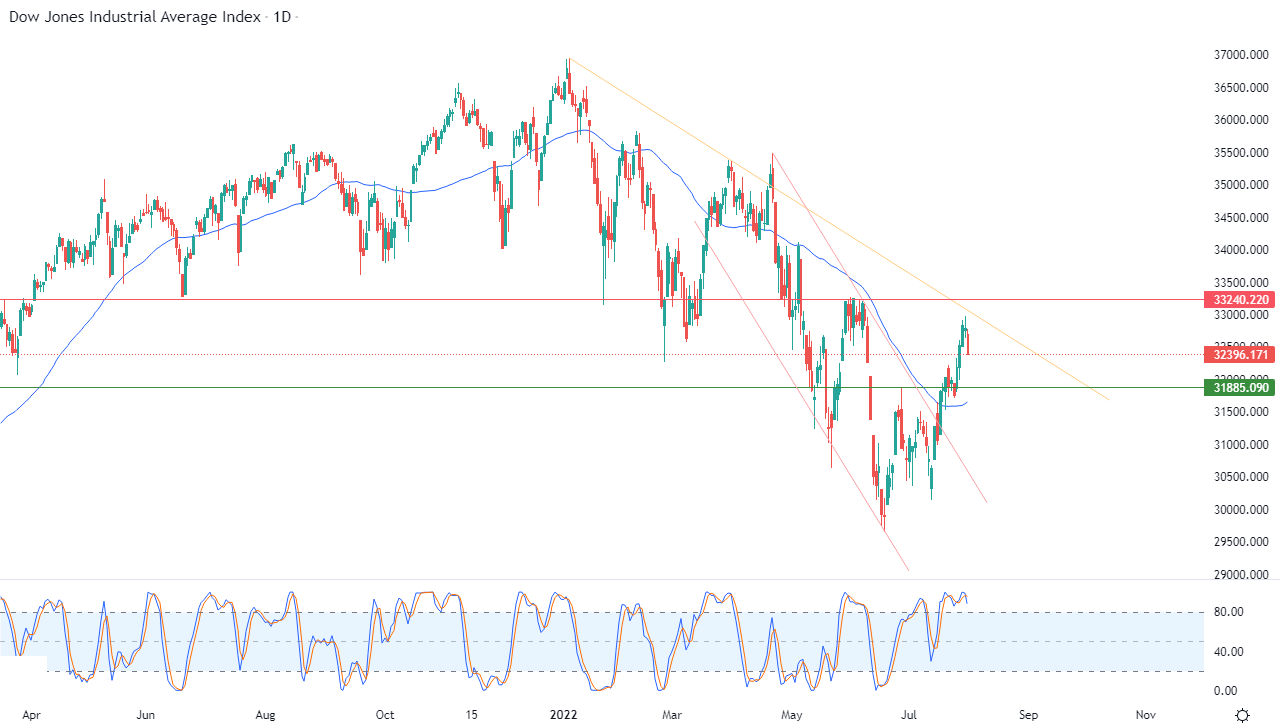 Ready to trade the Dow Jones in Forex? Here’s a list of some of the best CFD brokers to check out.

A decade of warnings on growing monkeypox threat were ignored