Technically, the bearish corrective trend dominates the movement of the indicator in the short term and along a slope line, as shown in the attached chart for a period (daily).

Data showed US job vacancies rose to 11.2 million in July, up from a revised 11 million in the previous month. The Conference Board’s Consumer Confidence Index jumped to 103.2 in August from a reading of 95.3 in July.

Meanwhile, Richmond Fed President Tom Barkin warned on Tuesday that a recession is a “clear danger” in the process of controlling inflation.

“We are committed to getting inflation under control and there is a way to get there,” he said in a discussion in the West Virginia Chamber of Commerce.

While Atlanta Federal Reserve Chairman Rafael Bostic said on Tuesday that policy makers know they have a “future fight” to bring down inflation, but they are committed to the task. In an article posted on the bank’s website, Bostic said the Fed is committed to keeping the economy “as strong as possible.”

New York Fed President John Williams said on Tuesday that the US central bank would likely need to raise the interest rate “somewhat above” 3.5% and keep it there until the end of 2023.

Technically, the bearish corrective trend dominates the movement of the indicator in the short term and along a slope line, as shown in the attached chart for a period (daily). We notice the continuation of negative signals on the relative strength indicators, despite their stability in oversold areas.

In addition to the above, we find that the index has crossed in its trading yesterday the support of its simple moving average for the previous 50 days. That is, doubling the negative pressures on its upcoming trading.

Therefore, our expectations indicate a further decline for the index during its upcoming trading session.  The index is expected to settle below the 32,272.65 resistance level, to targeting the 31,000 support level. 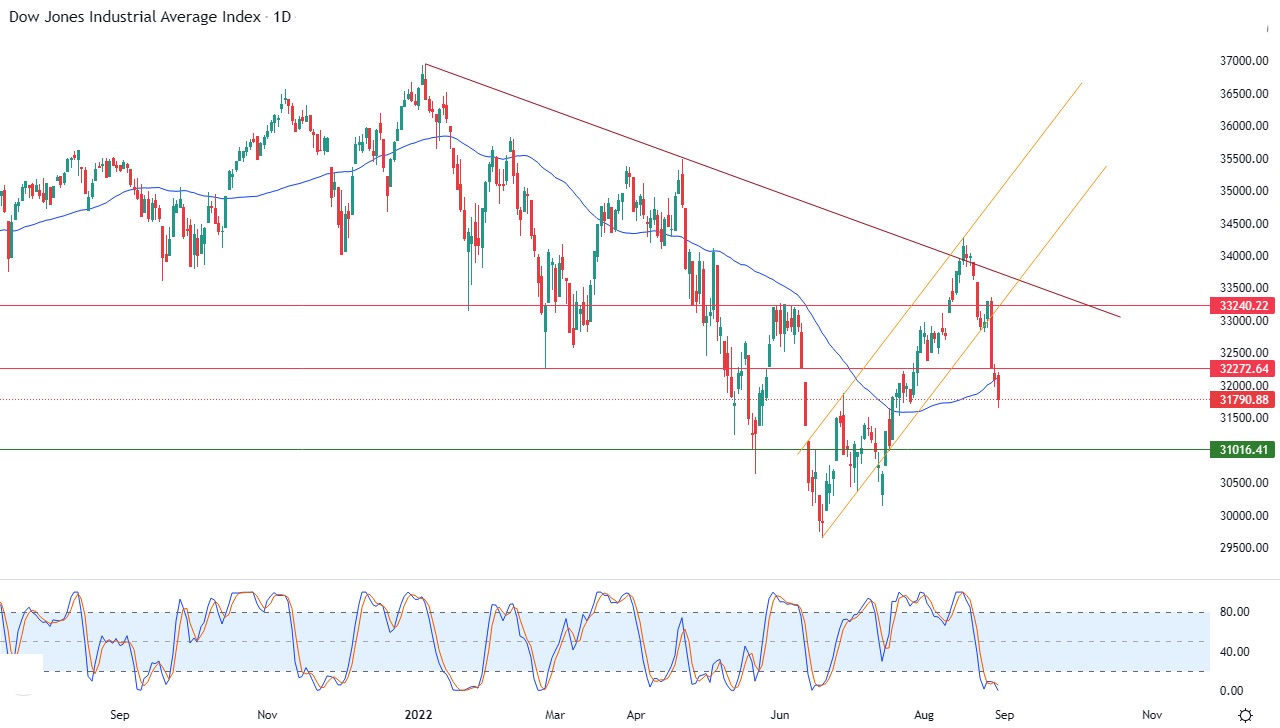 Ready to trade the Dow Jones 30? We’ve shortlisted the best CFD brokers in the industry for you.