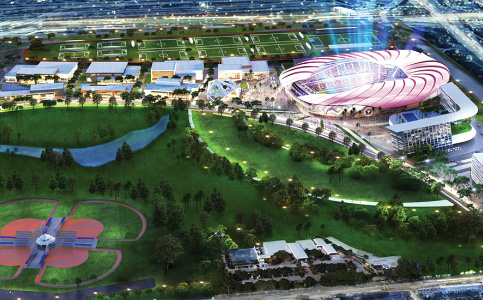 Miami-Dade commissioners deferred a report analyzing the potential impacts to Miami International Airport from the Miami Freedom Park project, home to the Inter Miami CF soccer team, to be developed at the Melreese Country Club, right next to the airport.

Commissioner Rebeca Sosa, who requested the report, proposed the deferral past 6 p.m., arguing she needed more time to go through the report with her colleagues and make public comments on it.

The report, completed in April but brought to the commission last week, addresses concerns of the Miami-Dade Aviation Department, the Department of Transportation and Public Works, and the Regulatory and Economic Resources Department.

The Aviation Department noted that the stadium’s planned height is above the county’s height restrictions; possible airspace conflicts with helicopters, blimps, drones, and banner tower operations from the use of lasers and fireworks; aircraft operational impacts during construction by the use of cranes within the arrival and departure paths of MIA’s longest runway; and the level of compliance of the development with county zone restrictions.

At an earlier City of Miami Urban Development Review Board meeting, attorney Iris Escarra, of Greenberg Traurig, representing Miami Freedom Park LLC, said the developers had lowered the height of the stadium.

“Because of our proximity to Miami International Airport, we’re in the outer safety zone, so we’re in certain flight path zones. From a height perspective, our height goes from 150 feet all the way to 160 maximum on the site. We can’t build any taller than that because of our proximity,” she said at a meeting.

Richard Perez, Holland & Knight attorney representing Inter Miami’s owners, confirmed to Miami Today during a community meeting that the developers plan to comply with all county, state, and federal regulations.

He said that Manica, the lead architectural firm designing the stadium, also designed the Allegiant Stadium in Las Vegas, close to the Harry Reid International Airport, and has the experience to build the Miami stadium in compliance with all the height and sound regulations in the county’s code.

An Aviation Department spokesperson confirmed to the newspaper that Miami Freedom Park attorneys said in a letter dated March 31, 2022, that in the near future they will file a complete application for consideration addressing the lighting and glare proposal; the airspace conflicts with helicopters, drones, and banners; the use of lasers and pyrotechnics; and the impacts on Federal Aviation Administration communications facilities.

In the document, the transportation department noted that a 2018 traffic study completed by the developers is outdated and does not reflect today’s traffic volumes. The department wrote that a new traffic study had not been delivered to the county as of April.

A spokesperson for the transportation department confirmed to the newspaper in late June that staff has not received a new traffic study from the developers addressing the concerns raised in 2019.

Darlene Fernandez, executive director of the Miami-Dade Expressway Authority, told the newspaper that the developers had already reached out to the authority for its input on the traffic analysis.

“Miami-Dade County, the state, the City of Miami and our airport staff, we sat with them to talk about what that traffic methodology is going to look like,” she said. “They’re not going to just give us a study report and walk away and say this is what we are building. It’s going to be a joint effort with all the stakeholders, so we’re having monthly meetings that just started last week [the fourth week of June] to talk about this methodology, and what are the improvements we want to see.”

At a community meeting on June 28, Ms. Escarra said the developers were considering using a residents’ sticker system that would allow residents to transit freely through nearby streets during special events and prevent non-residents from parking in those areas. The system would require 75% of the voters’ approval on each street.

The Melreese property currently has documented on-site solid waste and soil and groundwater contamination. The Regulatory and Economic Resources Department wrote in the report that any on-site contamination at the golf course, and any off-site contamination that originated from the property, “requires review and approval from the department’s Division of Environmental Resources Management to ensure the proper handling or disposal of contaminated material.”

In 2019, the developer submitted a supplemental site assessment report and a conceptual site rehabilitation plan to the department. The department is now requiring that the final plan be submitted for review and approval prior to site development activities.

Ms. Escarra explained at a community meeting that they are to clean the land from north to south and will install the utilities at the same time. She also said the developers will design a special stormwater management system to prevent water from getting into the soil.

A decade of warnings on growing monkeypox threat were ignored