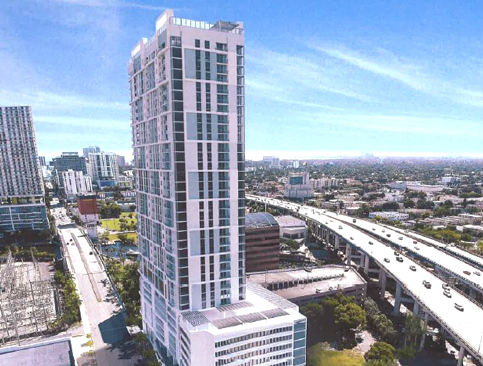 A complex public-private partnership is apparently falling apart between the City of Miami and a developer that won a bid to build a multi-million-dollar project on the Miami River.

Because the city is considering other options for construction of its new administration building, the Adler Group, through affiliate Lancelot Miami River LLC, is moving ahead with its own standalone residential tower on its own land near the river, at 230 SW Third St.

By working for years on the city partnership, Adler delayed construction on its own building north of the river after promising to build a government office building first, to replace the existing Miami Riverside Center at 444 SW Second Ave.

The new private residential tower that Adler/Lancelot plans, Nexus Riverside is to include 428 dwellings in a 36-story tower. Commercial-retail is to take 3,631 square feet, with a multi-story parking pedestal for up to 506 vehicles. The overall building planned for the vacant southwest quadrant at Southwest Third Street and Second Avenue will be 690,973 square feet.

“The city is exploring other options for its administration building and we want to move forward,” said Nicole S. Wolfe, an attorney for Adler/Lancelot.

Ms. Wolfe told Miami’s Urban Development Review Board the site plan probably looks familiar because in February 2020 the board approved a plan for a city government building on the west side of the site.

Board Chairman Willy Bermello asked her to clarify: “The government office building, is that not going forward?”

“The city is exploring other options and other locations… this will be a stand-alone residential building… we will go forward regardless of what happens with (the government) office building,” Ms. Wolfe responded.

If the city doesn’t build its new office complex on the Adler/Lancelot property, Mr. Bermello asked her, “what happens to the rest of the site?”

The city did not respond directly to Miami Today’s questions on status of new administrative building plans and the city’s partnership with Adler/Lancelot.

“If the city does go somewhere else, would you still do what you’re doing here now?” Mr. Bermello asked.

“We could build an office building there (on the western parcel),” said Ms. Wolfe. “This stand-alone residential (building) contemplates other towers. We’re envisioning that to be forthcoming. This is essentially the first phase.”

Board member Dean Lewis hailed the articulation of the planned public plaza and the large V columns as part of the ground floor supports and design but said the proposed building “doesn’t address the sky” and that he’s relatively disappointed in the look.

Board member Ignacio Permuy said, “I like the angular play (of the design), it brings in a lot of light.” He and other board members asked the developer’s team to reconsider ways to enhance the design and façade of the tower’s main northeast corner.

“I think it’s missed opportunity. That corner is asking for something else to be there. You have so many things going on, you can bring something else in to work well to define that corner,” said Mr. Permuy.

The board recommended approval of the project. In a letter to the city, Lancelot said the Nexus Riverside tower is expected to be open by 2023.