Editor’s Note: With so much market volatility, stay on top of daily news! Get caught up in minutes with our speedy summary of today’s must-read news and expert opinions. Sign up here!

(Kitco News) – Gold demand picked up in the second quarter, but it wasn’t enough to undo the weakness seen at the start of the year, according to the latest research from the World Gold Council.

Although gold demand is down sharply in the first half of the year, Juan Carlos Artigas, head of research at the WGC, said that investors need to look at the broader picture. He added that he would describe the selling in the investment market as a tactical adjustment from last year ‘s record inflows.

“Net-net, we are still in a positive investment territory,” he said. “Nothing we have seen in the second quarter and the first half of the year would suggest a shift in the broader market trends.”

Looking at the overall market, the WGC said that although the yellow metal stabilized between April and June, it could not recover from steep losses in investment demand in the first three months of the year. A wave of selling in gold-backed exchange-traded products swept through global markets during the first quarter. The report said that the gold ETF market saw inflows of 40.7 tonnes in the second quarter, leaving demand in the first six months of the year down by more than 129 tonnes.

ETF Investment demand is down sharply compared to 427.5 tonnes inflows seen in the second quarter of last year. However, the numbers are skewed as investors raced into gold at a record pace last year after central banks and governments worldwide pumped historic amounts of liquidity into markets to support the global economy devastated by lockdowns due to the COVID-19 pandemic. 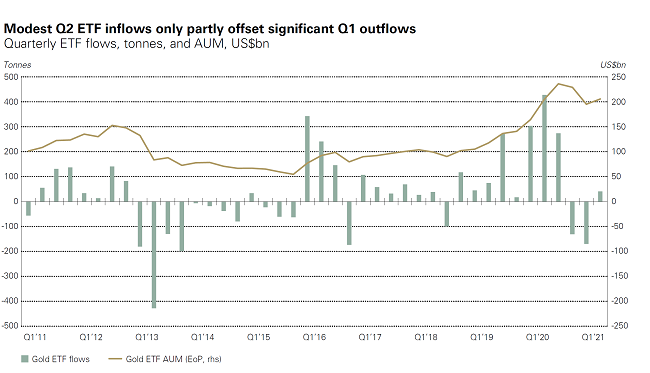 The WGC said that global gold investment demand totaled 283.9 tonnes, down 52% compared to the second quarter of 2020. While ETF demand was fairly lackluster, the report noted that bar and coin demand remained healthy through the second quarter, rising by 243 tonnes, an increase of 56% from last year but down 30% from the first quarter of 2021.

“Thailand was the largest contributor after switching from net negative investment in Q2 2020 to modest positive investment,” the report said. “Bar and coin demand is likely to gain on the back of rising inflation and gold ‘s strong returns momentum of the last couple of years, potentially reaching 1,100-1,250t. ETF investment, meanwhile, will almost certainly not maintain 2020 ‘s record pace. Instead, we expect demand to return to a more sustainable level, with annual inflows at or below the 10-year average of 150t,” the analysts said in the report.

The WGC also noted significant improvement in the Jewelry sector, which has been particularly hard hit due to the COVID-19 pandemic. The report said that global jewelry demand totaled 390.7 tonnes, up 60% from last year. However, total demand for the first half of the year was 873.7 tonnes, down 17% compared to the five-year average.

The WGC said that it expects jewelry demand to continue to improve throughout the year but remain below the five-year average.

“Continued global economic recovery should support consumer demand for global gold jewelry throughout 2021, although continued COVID disruption in some markets – most pertinently, India – will provide a headwind. While pent-up demand could serve as a boost, a strong price recovery in H2 could push jewelry demand towards the lower end of the range,” the analysts said.

“Looking ahead to the rest of the year, we are optimistic about the prospects for Chinese gold jewelry demand. Not only is Q2 a seasonally low quarter for gold jewelry demand, but policymakers continue to focus on stimulating domestic consumption with initiatives such as shopping festivals, which are likely to be supportive of local gold consumption. Furthermore, economic growth should also remain supportive,” the report said.

Meanwhile, India saw a 25% increase from its extremely low base reported last year. Demand in India during the first half totaled 157.6t, 46% below the H1 2019 and 39% lower compared to the five-year average.

One significant bright spot in the gold market was renewed demand from central banks. The report said that the central bank bought 333 tonnes of gold in the first half of 2021, 39% above the five-year average.

Thailand, Hungary, and Brazil were the biggest buyers in the gold market.

“Having been relatively subdued in the second half of 2020, demand picked up in the first half of 2021, with almost two-thirds concentrated in Q2,” the analysts said.