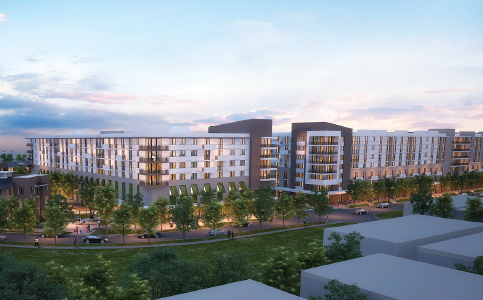 The first phase will yield 172 studio to four-bedroom apartments. Of those units, 58 will replace existing public housing under the county’s Housing and Urban Development’s Rental Assistance Demonstration program, serving persons with 30%, 40%, 60% and 80% of area median income. Thirty-four units are to be at market rate.

The development will consist of two 30-unit, three-story garden-style buildings, and one seven-story mixed-use building with 112 residences, 7,060 square feet of commercial space, parking and amenities, designed by Civica Architecture.

The second phase is Gallery at SoMi Parc with 386 apartments, 20 townhouses with ownership opportunities, and 8,100 square feet of commercial space, said Michael Liu, director of Miami-Dade County Public Housing and Community Development, at the groundbreaking Aug. 19.

“When we decided, in our last budget, to make some changes to have an affordable housing trust fund, it was a little polemic, but at the same time, we needed to do it so that we can help projects like this one and make sure that they get going,” said Miami-Dade Commissioner Raquel Regalado. “We really did everything we could as a commission to respond to the changing economic times and the insane demand that we have for housing in our community.”

Last May, county Mayor Daniella Levine Cava announced a $70 million Building Blocks Fund, part of which would help build affordable and workforce housing. Of that fund, $55 million was in commitments from private and non-profit partners over the next three years, according to the county.

The first phase of project would cost $68 million, closed with the help of $2 million from the affordable housing trust fund, said Mr. Liu. “Of course, these projects don’t happen without the private sector wanting to take on financial risk.”

Related Urban, in collaboration with the city, “has been very sensitive not to create a development that would overwhelm or be inconsistent with the community. [Adding affordable units] truly assists us to deal with the basic supply and demand problem that we have throughout Miami-Dade County,” said Mr. Liu.

Branches, established in 1973 to aid families and children in needy communities via education, resources and wellness services, is to provide social services such as financial literacy programs for future residents in the buildings, said Albert Milo Jr., president of Related Urban.

Related Urban recently began to renovate the Haley Sofge Towers, across from loanDepot Park, formerly Marlins Park, “a 240-unit deal we’re hoping to close by the end of this month,” said Mr. Milo. In early September, Related Urban plans to break ground on “our biggest single-phase project,” the Gallery at West Brickell, which would be a 321-foot-tall mixed-use development with 465 affordable units, 2,238 square feet of offices, 2,338 square feet of retail and up to 529 parking spaces.

“The disparity between the wealthy and the less wealthy has not gotten better, it’s gotten worse,” said Jorge Perez, chairman and CEO of Related Group. “And Dade County is the number one place with this problem, not so much because our rents are the highest, but because the comparison between the incomes and the rents that people charge become the lowest.”